Growing pressure on policymakers ringed in the start of Year 2022, with the US Federal Reserve paving the way forward – affirming their stance of an aggressive interest rate hiking cycle to combat stubbornly high inflation in the US, arising from supply chain disruption, labour shortage and high energy prices. Inflationary fears were further aggravated by Russia’s invasion of Ukraine on the 24th of February 2022 – causing Brent Oil prices to hold firm above the $100 mark, with US inflation print soaring in tandem with global commodity price movements – hitting a four-decade high of 8.5% in March – all of which were exacerbated by concerns over supply disruption and war-induced sanctions on Russia. In response, the US Federal Reserve kick-started its interest rate hiking cycle with a 25 basis points (bps) rate hike in March, on the back of its strong labour market – its first offense of many, expected this year.

Tremors from the Russia-Ukraine conflict were felt across Europe as well. Energy costs in the region hit new highs as Russia, accounting for approximately 40% of the EU’s natural gas imports, faces severe disruption in its supply chain to Europe. As a result, European natural gas prices rose by 18% in March since the start of the war, causing European consumer confidence to deteriorate concurrently.

Over in Asia, China markets were still heavily battered for the quarter ending 31st March 2022 due to increasing concerns over its economic growth – a spillover effect from tough regulations being enforced on real estate and internet companies last year. Nevertheless, markets rallied following assurances given by the Chinese Government that they would keep markets stable – signalling that a potential end to regulatory crackdowns on internet companies and a sharp slowdown in the property market would materialise soon. At present, risk to China’s economy prevails as the region is ravaged by rising COVID-19 cases, prompting authorities to impose strict lockdowns on several major cities, including Shenzhen and Shanghai, both of which are China’s key financial and technology hubs.

In ASEAN, there has been minimal direct repercussions from the Russia-Ukraine conflict. Notwithstanding, indirect implications rippled within ASEAN in the form of higher commodity prices and increased global inflationary pressures. This would prove beneficial for ASEAN commodity exporting nations such as Malaysia, Thailand, and Indonesia. Although COVID-19 cases remain high in the region, most reported cases appeared mild and did not require hospitalisation. This allows most ASEAN regions to move towards the endemic phase, with a focus on relaxing both border controls and standard operating procedures that were previously put in place during the pandemic. Many central banks in this region continued with their accommodative stances – keeping interest rates relatively unchanged to support economic recovery – thus contributing towards positive stock market gains in 1Q 2022.

On the domestic front, Malaysia’s Q4 year-on-year gross domestic product growth rebounded to +3.6% from negative growth in the previous quarter. The rebound was somewhat expected as economy reopening commenced towards end of 2021. Early indicators signalled moderate economic growth in 1Q 2022 and expected growth momentum to sustain from 2Q 2022 onwards as Malaysia transition to endemic phase of Covid-19 management and fully reopens economic activities as well as international borders.

1Q 2022 was a roller coaster of a quarter for the Equity market – started out strong, only to fade following the US Federal Reserve’s hawkish tilt and remained low as Omicron peaked globally. Markets had then corrected up till the end of February 2022 – to crumble once again after Russia launched its “special military operation” in Ukraine. Most markets had recorded double digit losses at the peak of the invasion. Fears of supply disruptions, especially within the commodity space had enabled commodity exporting countries to record positive stock market gains.

Malaysia’s FBM KLCI ended 1.3% higher q-o-q to finish the quarter at 1,587.36 points. Its best performing sectors were Plantation, Financial Services and Construction while its main detractors were in the Technology space.

The broader market recorded positive gains as well – with the FBM100 Index and the FBM Small Cap Index returning +0.5% and +3.4% q-o-q respectively.

Moving towards the 2H of 2022, we believe in the resiliency of the Malaysian equity market due to attractive valuations, local market benefitting from high commodity prices as well as the reopening of economy and international borders.

Local political sentiment is also expected to improve further – following Barisan Nasional’s landslide win in the recent Johor state elections, pointing towards a possible early general election. Through the formation of a new stable government, new policies would be rolled out, benefitting the economy while potentially attracting the inflow of foreign funds as well.

In the near term, we remain cautious on the impact of a global shift towards a tightened monetary policy and further escalations on the Russia-Ukraine front. Impact from geopolitical crises on financial markets had typically been short-lived in the past. Thus, we remain positive on the equity market over the longer term once geopolitical condition stabilizes and as economic recovery continues amid transition towards an endemic phase for Covid-19. 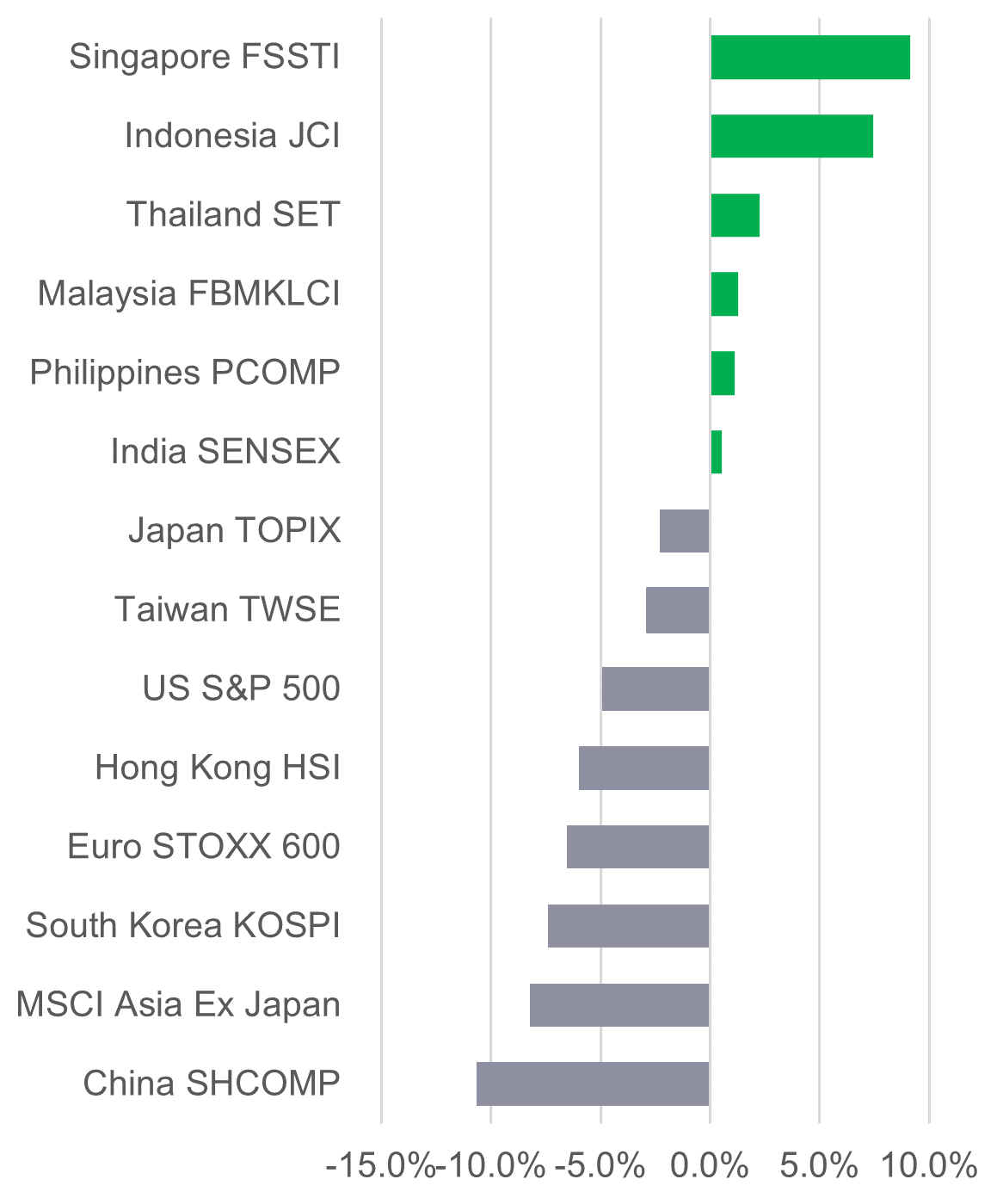 US Treasury (UST) yields surged amid ultra-hawkish stance by the US Federal Reserve and multi-decades high inflation prints. UST yields continued their upward march; 2-year, 5-year and 10-year UST rose +160 bps, +120 bps and +83 bps, closing the quarter at 2.33%, 2.46% and 2.34% respectively. The spike in yields transpired exponentially in March, following the US Federal Reserve’s decision to raise its benchmark Fed funds rate by 25 bps to a new target range of 0.25% - 0.50%, while doubling-down on its intention to hike aggressively to control inflation. The Fed also hinted at the possibility of a larger 50 bps rate hike quantum in the Fed’s next meeting.

In the Asian Dollar bond market, spreads widened on the back of geopolitical developments from Russia-Ukraine and ongoing property market slump as well as growth slowdown in China. Market sentiment recovered slightly in March as Russia and Ukraine engaged in peace talks while Chinese officials called for actions to stabilise the financial markets and proactive monetary response to boost economic growth.

In line with the bearish global bond market, Malaysian Government Securities (MGS) yield curve climbed as well. 3-year, 5-year and 10-year MGS yields rose +38 bps, +28 bps and +30 bps respectively to close at 3.18%, 3.43% and 3.87%. In March, Bank Negara Malaysia had kept the Overnight Policy Rates unchanged at 1.75%, while maintaining its accommodative stance to support recovery while ensuring price stability. With that, domestic factors are supportive for the MGS but external factors are expected to remain a drag in the near term. We are cautious of inflationary and outflow risks in the market but is more positive on the long-term outlook of bond markets once external development stabilises.