The global economy’s challenging momentum unfurled further in Q3 2022 as it continues to be held captive by recessionary fears, monetary policy jitters, China’s zero-COVID policy, and the impact of Russia’s invasion of Ukraine.

Global inflation direction remains an important driving force of the market, given its bearing on the aggressiveness of monetary policies being implemented by central banks worldwide. For example, the US Federal Reserve (US Fed) doubled down on its hawkish signals and diminished hopes of a dovish pivot as inflation remained well above the 8% mark, even hitting 40-year highs.

To date, the US Fed has raised its benchmark interest rates by a staggering 300 basis points (bps) in totality since March, with a 75 bps quantum each time in its last three (3) hiking cycles. The US Fed is not alone, as other central banks globally in the United Kingdom (UK), European Union (EU), Canada, Australia, and many more are embarking on this gruelling journey as well.

This global shift towards monetary policy tightening has rattled markets and heightened volatility while fuelling concerns for a quickly weakening global economy that is in danger of slipping into recession. Effects of this can already be seen creeping up in the US, after reporting two (2) consecutive quarters of negative gross domestic product (GDP) growth (quarter-on-quarter Q1 2022: -1.6%, Q2 2022: -0.9%).

Aftershocks from Russia’s invasion of Ukraine is still felt globally, eight (8) months after the invasion first began, further exacerbating pre-existing tensions in global supply chains of commodities such as energy and food. Sanctions against Russia drove the nation to weaponize energy by cutting off gas supplies to Europe, throwing Europe into its biggest energy crisis in decades. This contributed to EU’s record-high inflation print of 10% in September 2022, pushing The European Central Bank to undertake more aggressive rate hikes in its coming meetings, despite having raised rates by a combined 125 bps in its last two meetings.

Geopolitical tensions, recessionary fears, together with the US Fed’s ultra-hawkish stance sparked a global rush to safety, creating a push-pull series of effects – where risky assets are pushed down while safe haven assets such as the US Dollar are pulled up, causing the US Dollar Index to peak at +19.3% in 20221. This confluence of factors led to a more “gloomy and uncertain” outlook for the global economy. The International Monetary Fund (IMF) slashed global GDP forecasts to 3.2% in 2022 (0.4% down) and 2.9% in 2023 (0.7% down) from April’s estimates.

Over in China, policymakers continue prioritising its “COVID-Zero” strategy over economic activity. Sporadic lockdowns within the region persisted, including the 21.2mil densely populated city of Chengdu – largest city to be locked down since Shanghai in April. Further intensifying concerns over China’s economy is its deepening property crisis, which left most developers with alarming levels of debt and induced a string of bond defaults among major real estate players – Evergrande, Shimao and Sunac China to name a few. In response, The People’s Bank of China (PBoC) pledged to support the economy in the form of lower rates, short-term liquidity injections, infrastructure investment while launching bailout funds and special loans to aid developers to complete unfinished homes across the nation.

Overall, most stock indexes ended Q3 2022 in negative territory. Chinese indexes such as Hong Kong’s Hang Seng Index (-21.2% quarter-on-quarter (QoQ)) as well as the Shanghai Composite Index (-11.0% QoQ) found themselves at the bottom of the barrel as China’s zero-COVID pursuit, together with its property market slump continued to weigh on its economy. Finishing just above them are the technology-heavy indices – the Taiwan TWSE (-9.5% QoQ) and the South Korean KOSPI (-7.6% QoQ), collateral victims from the shift towards higher interest rates globally this year.

India’s SENSEX (+8.3% QoQ) came out on top this quarter. Three of its key sectors, namely – energy, fast-moving consumer goods (FMCG) and metals reaped the benefits of elevated prices in both food and energy. The same trend is seen in Indonesia’s JCI (+1.9% QoQ) as well. Finishing behind India and Indonesia is Thailand’s SET (+1.4% QoQ) and Singapore’s FSSTI (+0.9% QoQ), lifted from its reopening progress this year.

In the local market, the FBMKLCI demonstrated phenomenal resilience up till the end of August 2022, generating 3.32% and 1.33% in gains for July 2022 and August 2022 respectively. Both gains were aided by the expectation of an earlier-than-expected US Fed policy pivot, following the release of softer July’s inflation print there. During this period, market sentiment improved globally, with Malaysia attracting strong foreign inflows – foreign investors were net buyers with total net inflow of RM5.81bil, for 24 out of the 41 weeks of 20222. However, the local bourse then tumbled in September 2022 as the hopes of a possible US Fed pivot were crushed as inflation levels remained high in August. For the month of September 2022 itself, the FBM KLCI posted a negative return of 7.77%, ending the quarter at a low of 1394.63 points, which translates to a quarter-to-date return of -3.4%.

Year-to-date September 2022, the only sector that generated positive return is the Financial Services sector – a sector that is inclined to thrive in a rising interest rate environment. The Financial Services sector was one of the main beneficiaries of foreign investments as well, often seen as a proxy for foreign investors to enter and gain exposure in the Malaysian stock market.

In the broader market, the FBM 100 Index, together with the FBM Small Cap Index generated losses as well – returning -3.2% QoQ and -3.6% QoQ respectively.

In the near term, the equity market is expected to remain challenging. Hence, we will continue to adopt a defensive approach in the Malaysian Equity space, with a preference towards being nimble while taking advantage of the current market weakness to build positions for 2023 and beyond. Our current portfolio strategy will be centred around attractively valued dividend-paying stocks with firm fundamentals. 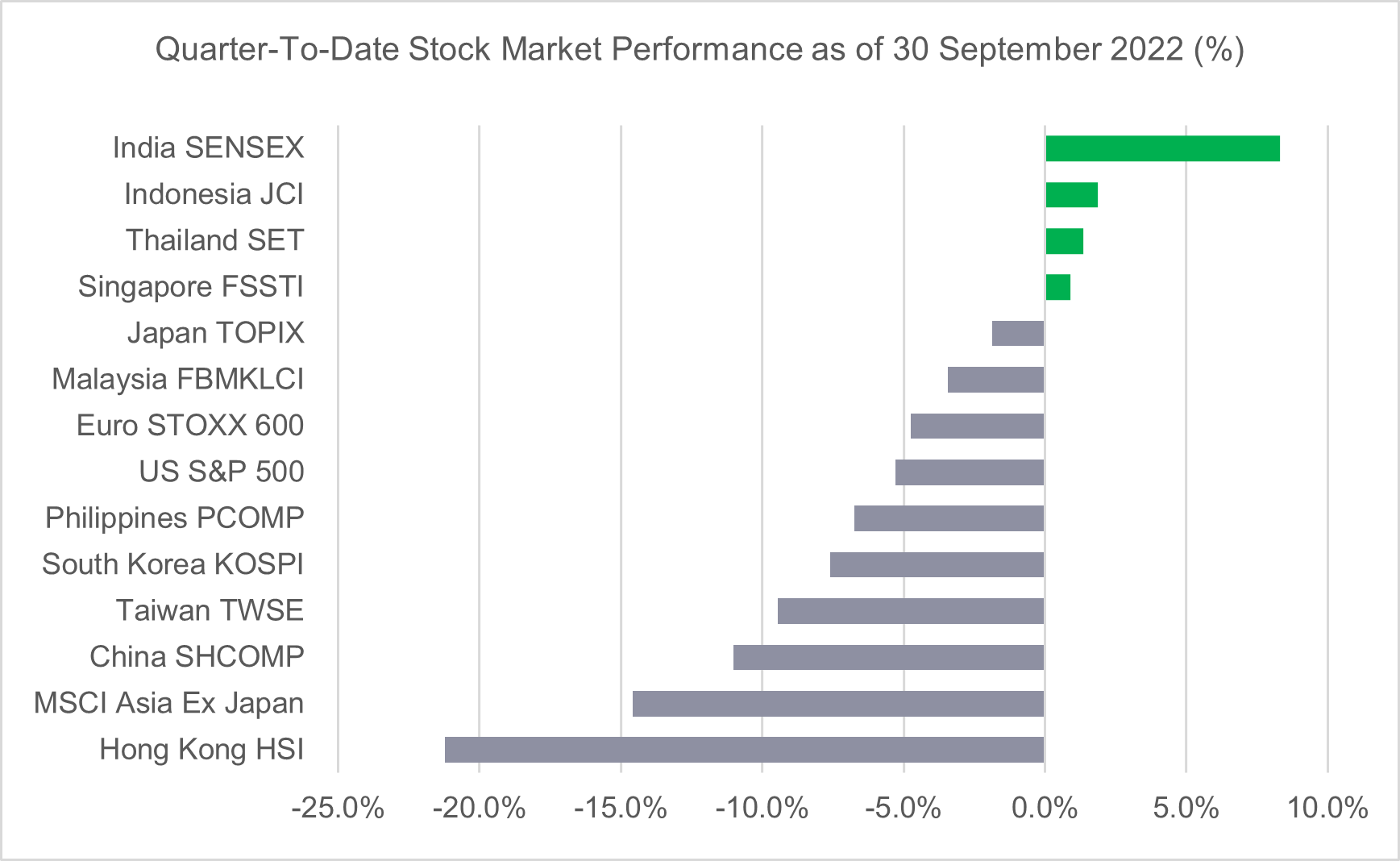 US Treasury (UST) yields soared further in Q3 2022 – the 2-year, 5-year and 10-year UST yields changed +133bps, +105bps and +82bps to close at 4.28%, 4.09% and 3.83% respectively. UST yields were subdued in July and August, as markets staged a short relief rally, driven by hopes of an earlier-than-expected US Fed Policy pivot. UST yields then soared in September as the Fed reiterated its ultra-hawkish stance. The rapid rise in short-term yields had inversed the yield curve further as well.

In the Asian Dollar Bond Market, both investment grade and high yielders found no reprieve, ending 3Q 2022 in the red at -3.77% and -7.70% respectively3. High yield bonds were vulnerable due to growing risk-off sentiment.

In line with rising yields in the global bond markets, Malaysian Government Securities (MGS) yields rose – 3-year, 5-year and 10-year MGS yields changed +29bps, +14bps and +22bps respectively to close at 3.78%, 4.08% and 4.46% for the quarter ending September 2022. Understandably, the quantum of increase in yields were much less than that of USTs as rate hike expectations in Malaysia is less aggressive.

BNM had raised the OPR twice in 3Q 2022, from 2.00% to 2.50%. In the last Monetary Policy Committee Meeting in September 2022, BNM reiterated a measured and gradual unwinding of accommodative monetary policy but added that “the MPC is not on any pre-set course” on policy normalization, indicating a more data-dependent path going forward.

In general, we are neutral on the outlook of MGS. Over the short-term, volatility in the market is expected to heighten with risks emanating from an ultra-aggressive US Fed tightening, persistently high inflation levels, coupled with continuous geopolitical tensions. This warrants a cautious stance on the market in the short term, with vigilance on currency movements and outflow risks. On a separate note, we think that the rise in bond yields serve as a timely correction for the market, allowing for healthier and more sustainable income return from bond investments.