Q2 2022 Malaysia market review: Hiking our way out of inflation

Q2 2022 has been a turbulent quarter for the global economy as it continues to be held captive by recession fears, monetary policy jitters, China’s lockdown and the impact of Russia’s invasion of Ukraine.

The economy once again, bore the brunt of surging inflation. Most regions during this period published record-breaking high inflation; inflation print in the US soared to a new four-decade high of 9.1% in June 2022, beating an already heightened consensus estimates of 8.8%. In response, central banks across the globe are now on a one-way mission to hike interest rates, unleashing what may prove to be the most aggressive tightening cycle since the 1980s – with the US Federal Reserve (the Fed) leading the pack. To date, the Fed has raised its benchmark interest rates thrice since March 2022, with a staggering 150 basis points (bps) in totality.

The Russia-Ukraine conflict, which started four months ago, shows no sign of abating. The combination of Russian sanctions, blocked Ukrainian ports, coupled with damages caused on the Ukrainian agricultural sector has led to weaker growth, supply chain disruptions and food inflation globally. These effects have proved detrimental for most regions, to food security concerns, prompting several regions to restrict food exports. For instance, we have seen export bans on Malaysian chickens, Indian wheat and Indonesian cooking oil being placed over the last quarter.

Over in China, policymakers continued prioritising its “zero-COVID” strategy over economic activity. At its Omicron peak, nearly 400 million people across 45 cities were under some form of lockdown, including in China’s key financial hubs – Beijing and Shanghai. As a result, Chinese stocks tumbled. Subsequently, after a strict two-month lockdown, COVID-19 cases started dwindling, allowing Chinese officials to announce a targeted reopening date for Beijing as well as Shanghai – 1 June 2022. At the same time, The People’s Bank of China (PBoC) cut its five-year loan prime rate (LPR) by 15 bps to 4.45% in May 2022 and vowed to remain accommodative to support China’s economic activity. The easing of COVID-19 curbs, together with PBoC’s slew of measures to revive the economy boosted sentiment and triggered dip-buying in the region’s battered stock market.

In ASEAN, broad economic reopening within this region propelled the release of pent-up consumer demand. This fact, together with strong commodity prices spurred the return of foreign funds – as observed in Indonesia, Thailand, and Malaysia, directly contributing to its Q1 gross domestic product (GDP) expansion for most economies within this region.

On the domestic front, pre-pandemic levels of activity were restored as most COVID-19 related restrictions were scrapped. This contributed to Malaysia’s strong Q1 2022 year-on-year (y-o-y) GDP print of 5%. At the same time, Malaysia’s y-o-y headline inflation accelerated to 2.8% in May 2022, adding pressure on Bank Negara Malaysia (BNM) to raise the Overnight Policy Rate (OPR) by 25 bps on 11 May 2022. In this meeting, BNM reiterated its intention to take a “measured and gradual” pace with its tightening cycle while holding firm to its economic growth forecast of between 5.3% - 6.3% for Malaysia in 2022. We are expecting growth momentum to sustain in the coming quarters of 2022.

Overall, the global equity market ended Q2 2022 in a sea of red. Technology-heavy indexes such as the US S&P500 (-16.4% quarter-on-quarter (q-o-q)), Taiwan TWSE (-16.2% q-o-q) and the South Korean KOSPI (-15.4% q-o-q) found themselves at the bottom of the barrel once again as the Fed doubles down on calls for aggressive rate hikes to tame inflation.

China’s SHCOMP finished Q2 2022 as one of the top performers after taking a nosedive at the beginning of the quarter following strict lockdown impositions by Chinese authorities. At its lowest, both the Shanghai Composite Index, together with the Hong Kong HSI had fallen between 11 – 13% each since the beginning of the quarter. Subsequently, once its targeted reopening date of 1 June 2022 was announced, sentiment for the Chinese stock market improved, reversing its losses, and coming out in the green to finish Q2 2022 at +4.5% q-o-q. Hong Kong’s HSI also did relatively well, finishing the quarter at -0.6% q-o-q.

In the local market, the FBMKLCI had shown phenomenal resilience up until end of May 2022, on the back of strong foreign inflows; foreign investors were net buyers with total net inflows of RM5.95 billion, for 17 out of the 27 weeks of 20221. However, the local bourse tumbled in June 2022 in tandem with the global selloff in the equity space, as growing inflationary and recessionary fears weighed down on investor sentiment. For the month of June 2022 itself, the FBM KLCI posted a negative return of -8.02%, ending the quarter at a low of 1444.22 points, which translates to a quarter-to-date (QTD) return of -9.02%.

Year-to-date June 2022, the best performing sectors were Plantation and Financial Services – with the Plantation sector being supported by strong commodity prices in the first five months of the year whilst the latter is more inclined to thrive in a rising interest rate environment. Both sectors were favourites among foreign investors.

In the near term, we remain cautious on the prospects of a global slowdown in growth and persistent inflationary pressures. Arguably, during times of volatility, the Malaysian equity market is known to have a competitive advantage over its peers – in terms of defensiveness and stability. Hence, we continue to believe that adopting a defensive approach in the Malaysian Equity space is key in navigating the ups and downs of today’s volatile world. Furthermore, this recent sell-down in the equity space has allowed us to bottom-fish on attractively valued stocks with firm fundamentals. 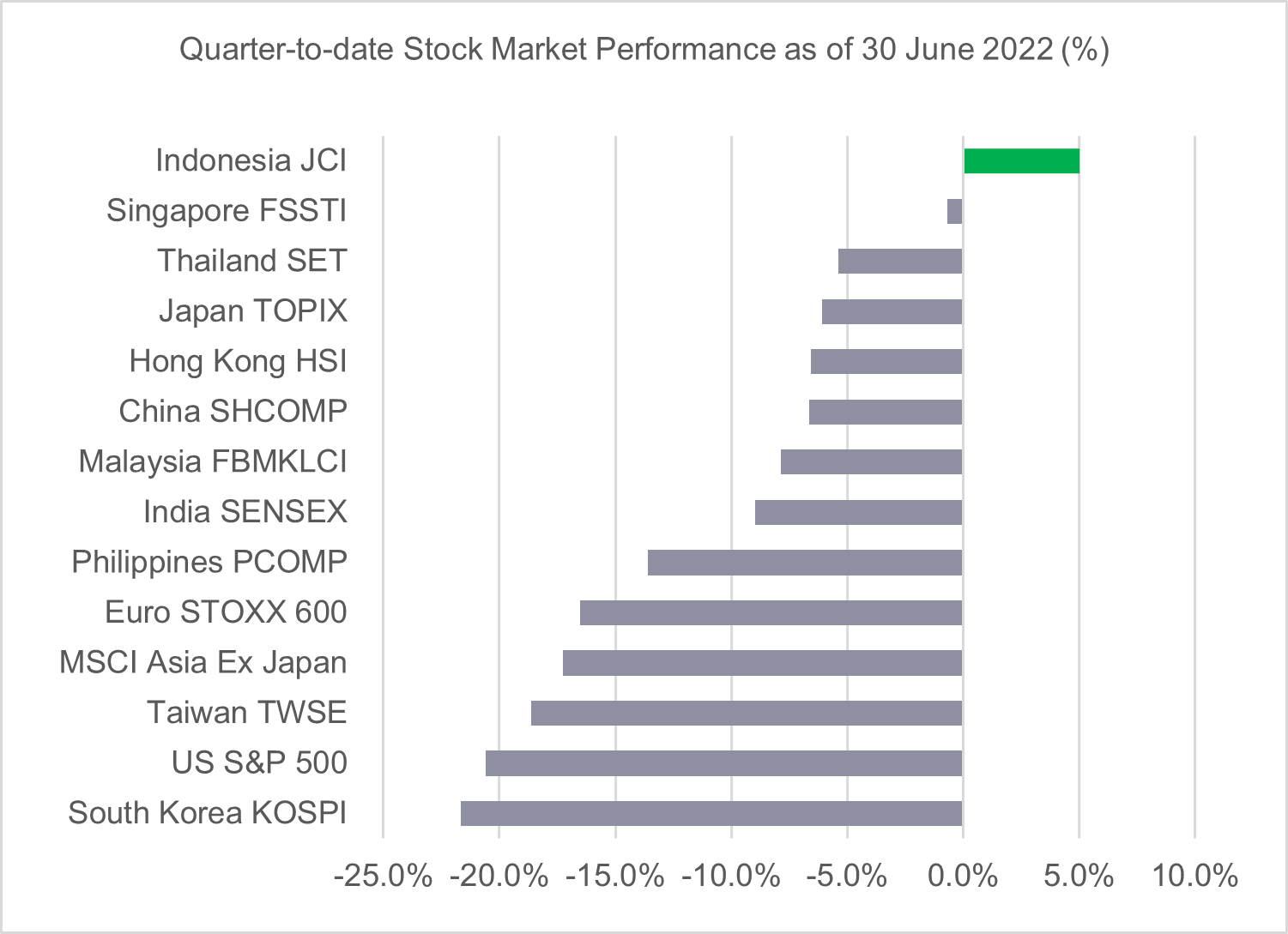 US Treasury (UST) yields soared in Q2 2022 – the 2-year, 5-year and 10-year UST yields changed +61 bps, +58 bps and +67 bps to close at 2.95%, 3.04% and 3.01% respectively, reaching new highs since 2018. UST yields climbed in April and May, before soaring in the first half of June as markets rushed to price in more aggressive Fed rate hikes, leading up to the Fed’s eventual 75 bps rate hike on 16 June 2022. This was the largest rate hike delivered by the Fed since 1994. Markets had then staged a relief rally after, leaving UST yields to consolidate lower and flatter – following a statement that was released by Fed Chair Jerome Powell that the Fed is still able to achieve a “soft landing”, a scenario where inflation is controlled, and recession is averted.

Moving forward, we believe that the Fed’s rhetoric will continue to drive market volatility. Forecast-wise, the Fed’s “dot plot” shows that median rates are expected to drift around the 3.375% handle by year end2.

In the Asian Dollar Bond Market, both investment grade and high yielders found no reprieve, ending 1H 2022 in the red at -9.89% and -19.19% respectively. High yield bonds were vulnerable due to growing risk-off sentiment.

In general, we are neutral on the outlook of MGS. Over the short-term, market is expected to be volatile and choppy with risks emanating predominantly from increasing domestic inflation and possible funds outflow as global liquidity recedes. However, local supply-demand dynamics are supportive, and most parts of the MGS yield curve has priced in a full normalisation of OPR to 3.00%. As such, we are more optimistic on the longer-term outlook of MGS.

Higher domestic inflation and expectations of resilient local GDP growth reduce the barriers to OPR normalisation by BNM. However, we do not think BNM will hike OPR aggressively in light of external headwinds to growth. On a separate note, we think that the rise in bond yields serve as a timely correction for the market, allowing for healthier and more sustainable income return from bond investments.